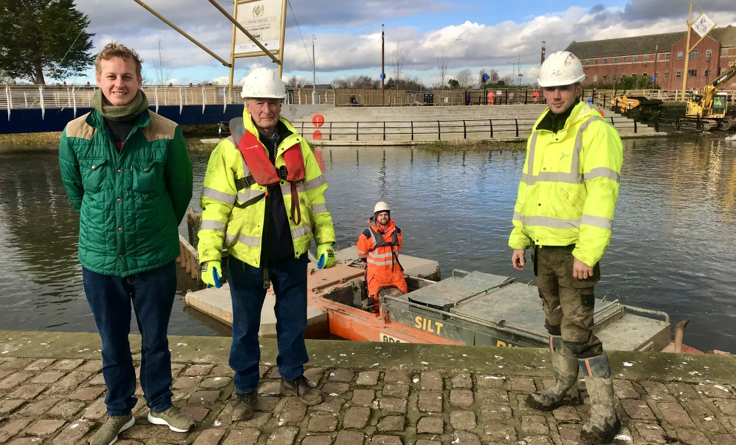 Work finished last week on a key project to improve the water quality of the River Freshney in Grimsby Town Centre with more than 2230 tonnes of silt removed from the riverbed over four weeks.

Specialist contractor, Ebsford Environmental, were appointed to undertake dredging of the river between West Haven Maltings opposite Frederick Ward Way and the ABP pumping station.

During the project, 122 lorry loads of silt and sediment were taken from the riverbed and removed off site for recovery to meet the Environmental Agency waste directive regulations.

Additionally, 1.5tonnes of scrap metal, including bikes, shopping trollies and scaffold pipes, was taken from the riverbed and recycled at our local plant in Immingham.

Dredging this section of the riverbed has allowed the water to flow much more freely in the town centre section of the river, with the channel depth now around 1.8m. Established vegetation has been maintained for the benefit of wildlife in the area.

Cllr Stewart Swinburn, Cabinet member for the environment, said: “This work has been done as one of the final stages of the Garth Lane project, one that’s already seen a major site in the centre of Grimsby transformed into a lovely natural area.

“We’ve already seen an improvement in the water quality and flow. We’ve also seen the family of otters around in the last few days, which is encouraging. The dredging will boost biodiversity and make the river more useable for years to come.”

Cllr Callum Procter, Cabinet member for economic growth, added: “This is a huge investment in our river – for years, we’ve turned our back on the waterfront, and it’s now time to embrace it and all that it might offer. Investing in clearing up the river is the first stage, and along with the Youth Zone project and the Towns Fund projects nearby, I’m looking forward to seeing the waterfront develop into a vibrant place in the future.”

The depth of the river will be reviewed in 12 months’ time to see how quickly the silt is building back up and help form a future management and maintenance plan.

These works are part of the £3.7m Garth Lane site scheme funded by Central Government, through the Town Deal and the Humber Local Enterprise Partnership.