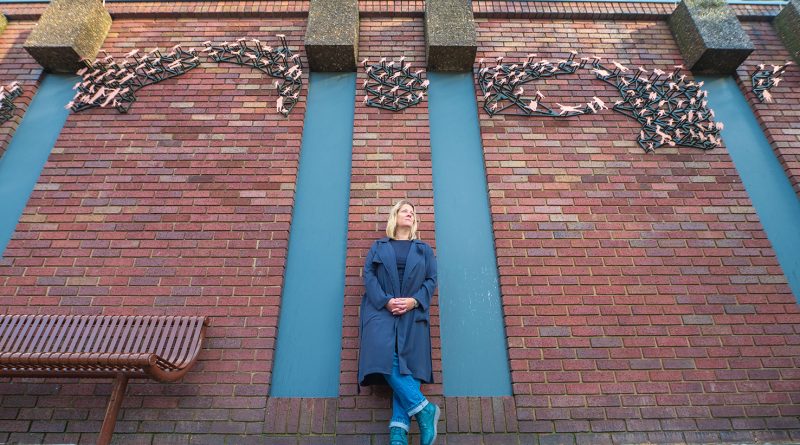 Annabel McCourt’s (pictured) and her Murmuration artwork in St James Square is just one of the projects that have been made possible by Our Big Picture, which is looking forward to expanding its work.

A MAJOR boost to supporting and growing arts and creativity across North East Lincolnshire has been unveiled, with the awarding of a £50,000 grant to a leading local organisation.

It has been revealed today that Our Big Picture is to be the first beneficiary of a grant from the Grimsby Town Centre Activation and Community Engagement Fund.  It will enable the social enterprise company, led by its founder Paula Denton, to pursue a whole host of projects with the aim of involving as many people as possible in the arts.

The Fund has been launched by North East Lincolnshire Council to encourage and support businesses and organisations with innovative ideas to help regenerate the town centre. Others are now encouraged to come forward.

Our Big Picture has already achieved some major successes in this field. This has included the commissioning of Grimsby artist Annabel McCourt to create the Murmuration artwork in St James Square, and the work of Adrian Riley who created the historical etched paving, also in the revamped Square. Both those art pieces involved scores of local people.

Art in the Market, in Grimsby Top Town Market, is another Our Big Picture project which encourages people to take part in workshops, children and young people’s activities and exhibitions with market stall space taken to do so. Imaginarium gy is an artist development programme for 16 to 25-year-olds which is now expanding to be called the ‘Imagine Club’ – an art club for 13 to 16-year-olds.

Meanwhile the organisation’s Great British Fish & Chips Project has received North East Lincolnshire Council heritage starter funding for initial research. A collaboration with artist Olivier Kugler and writer Andrew Humphreys sees this project using Fish & Chips to investigate our cultural and social history, national identity, migration and global economics. The final project will be presented in the form of drawings and text like a graphic novel and shown at exhibitions and an art trail around the town.

Delighted at the major Grimsby Town Centre Activation and Community Engagement Fund, Paula said: “There are so many ways that people can be creative and engaged in arts and heritage – not just in traditional ways, but in story telling and capturing moments in their lives that can then be interpreted and used to help shape projects. So many people can be involved, and we are thrilled that we have more opportunity now to bring such projects to life. Art and creativity can change a place and the perceptions that people have.”

The Fund itself is the brainchild of North East Lincolnshire Council, which has been given permission to use an £850,000 slice of its £20.9m Towns Fund award from Central Government for it. People can apply if they have business or community ventures that will support and add interest to the larger regeneration projects that are underway, completed or planned in the town centre.

Council leader, Cllr Philip Jackson, is now encouraging more people to take Paula’s lead and think about just how they can help the reshaping and regeneration.

“We know there are some extremely talented businesspeople and organisations out there who have Grimsby and the wider community at their hearts. If they have the ideas and the know-how, then we can help to provide them a financial boost to realise their dreams, which will in turn realise the ambitions we have for our place,” said Cllr Jackson.

Applications of between £500 and £25,000 can be submitted to be considered by a private and public sector business panel for approval. Projects must fit with at least one of the following six town centre priorities identified in the Grimsby Masterplan:

For more information and a form to complete go to https://www.nelincs.gov.uk/business-and-investment/town-deal/